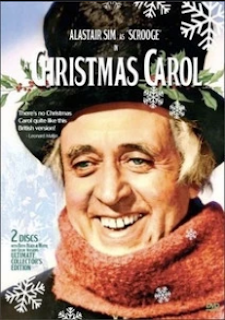 The film begins with a hand taking a copy of the book titled A Christmas Carol, off a shelve full of other novels by Charles Dickens.  A Narrator (Peter Bull) quotes the initial lines about Jacob Marley (Michael Hordern) being dead, as the initial credits appear, on what appear to be sheets of paper or pages of a book.

The opening scene, after the opening credits, is at the Exchange, where Scrooge engages in a conversation about Christmas with other businessmen.  A man named Samuel Wilkins begs him for more time to pay off his loan, on the steps of the Exchange.

After showing Mr. Wilkins no mercy, Scrooge walks to his office, inside of which two gentlemen are waiting to ask him for a donation.

Fred (Brian Worth) arrives after the gentlemen leave without a donation from Mr. Scrooge.  Mr. Scrooge shows him the door as well.

Then there is an scene featuring Tiny Tim (Glyn Dearman) and his mother (Hermione Baddeley), window shopping.

Meanwhile, back at Scrooge's office, Scrooge tells Bob Cratchit (Mervyn Johns) to take the next day, Christmas, off.  Then he leaves Bob to close shop.

Scrooge goes to a tavern after work, but seems unfamiliar with it, unlike the tavern Dickens describes, in his novel, as Scrooge's "usual, melancholy tavern," because, when Scrooge asks for more bread, the waiter changes his mind by informing him that bread costs extra.

When Scrooge arrives at the building where he lives, Scrooge hears someone calling his name.  Then Jacob's face appears in the doorknocker, with his eyes closed; then Jacob opens his eyes, startling Scrooge.  Later, Jacob Marley appears to Scrooge in person, and tells Scrooge about the three Ghosts that will visit him.  He tells Scrooge the first Ghost will arrive at one-o'-clock.

He also shows him other ghosts outside Scrooge's window, lamenting that they can no longer help the poor.  Then Marley takes his leave of Scrooge.

Scrooge slams the window shut, and literally runs to bed, where he pulls all of the bed curtains closed, and hides under his bed covers.

The bell tolls one, and the Ghost of Christmas Past (Michael Dolan) appears, taking Scrooge to see his school, and his sister, Fan. The scene of her death is added, as she begs Scrooge, with her dying breath, to take of her son.

Scrooge revisits the Fezziwig Christmas Ball, and his fiancee, named Alice (Rona Anderson), instead of Belle, in this adaptation.

Also added are scenes in which a new character, Mr. Jorkin (Jack Warner), offers Mr. Fezziwig (Roddy Hughes) a business proposition, which Mr. Fezziwig refuses.  However, Mr. Jorkin is able to persuade young Scrooge (Geoge Cole) to leave Mr. Fezziwig's company, and take a job at his company, where he becomes friends with Jacob Marley.

Mr. Jorkin is caught embezzling, but the scandal threatens to devalue the company's stock, so Scrooge and Marley offer to pay off the company's debt, on the condition that they are allowed to buy 51% of the stock in the company, effectively making them the new owners.

They take over Mr. Fezziwig's company, as well, letting one young employee keep his job, but for four Shillings per week, instead of the five Mr. Fezziwig was paying him.

Mrs. Dilber (Kathleen Harrison) goes to Scrooge's office to ask him to visit Marley in Marley's final moments.  Scrooge does so, after work.  The undertaker (Ernest Thesiger) is already there, waiting for Marley to die.  Marley tries to tell Scrooge that they were wrong, and to save himself, but Scrooge doesn't understand.

When Marley dies, Scrooge is only too happy to inherit all of Marley's belongings.

Instead of showing Alice with a husband and children, the Ghost shows her in what appears to be a homeless shelter, comforting the poor.

The Ghost also shows Scrooge Fred's Christmas Party, where Fred proposes a toast to Mr. Scrooge, although two of the women there indicate that they despise Scrooge.

No games are played, but Fred and his guests dance a waltz.

The Ghost of Christmas Present shows Scrooge Ignorance and Want, in the form of children hiding under his robe.  Then he leaves Scrooge running down the street...

...and into the Ghost of Christmas Yet to Come (Czeslaw Konarski).

This ghost shows Scrooge the Cratchits mourning for Tiny Tim; the scene with Mrs. Dilber, another woman, and the undertaker, at Old Joe (Miles Malleson's) pawn shop, which, in this adaptation, is filled with children working among his marketable rubbish; and the two businessmen at the Exchange mentioning Scrooge's death, without naming him.  When Scrooge asks who they're talking about, the Ghost shows him his tombstone.

Begging for mercy, Scrooge wakes up to find himself in his own bed on Christmas morning.  He asks his charwoman, Mrs. Dilber what day it is, and gives her a Guinea for a Christmas present.  He also promises to raise her wages from two Shillings a week to ten.  Then he sends her away to celebrate Christmas.

Then Scrooge looks outside his bedroom window, and sends a boy to get the prize turkey, which he sends to Bob Cratchit's house.

Then Scrooge goes to Christmas dinner at Fred's.

The next day, Scrooge catches Bob coming in late to work.  Instead of punishing him, he raises Bob's salary.  After promising to discuss this over a hot bowl of punch, he sends Bob out to buy some more coal.
Is this adaptation a prequel or a sequel?  No.
Is this adaptation supernatural?
Yes, this film features ghosts and time travel.

Is this adaptation "framed"?
Yes, this adaptation is framed by a Narrator, whose voice is heard at the beginning and end of the film.
Is this adaptation a musical?  No.
What songs and/or dances are included?
Musical score by Richard Addinsell... There are several musical numbers and dances included in this adaptation, including "Barbara Allen," sung by Fred and his guests.

How attractive and effective is the visual art?
The set, wardrobe, and art are adequate.

How creative and intense are the transitions, especially when "the Scrooge" is taken from one time and/or place to another?
The transitions are adequate; an hourglass floats and/or spins through a windy tunnel to show time travel.
What aerial and/or nap-of-the-earth footage is included?  N/A
What use is made of background extras?
Adequate use is made of background extras; for example, there seem to be plenty of people at Fred's party.
What is the most remarkable thing about this adaptation?
The most remarkable thing about this adaptation is, perhaps, the addition of Mr. Jorkin, who hires Scrooge and introduces him to Jacob Marley, and the scenes which develop Jacob and Marley's characters and their relationship with each other over the years.
What bonus material is included on the tape or DVD?
The "Ultimate Collector's Edition" includes two discs, which are not labeled Disc 1/A and 2/B, or anything like that, so I'll call them "Colorized" and "Black and White." 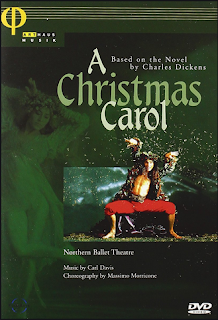 Instead of two portly gentlemen entering Scrooge's office to ask him for a donation, a crowd of picketers appear outside his office, where Bob Cratchit joins them in asking for "Christmas Comfort for the Poor," and for people to "Feed the Hungry."

Fred apparently brings a woman (presumably, his wife) to visit Scrooge at his office.

An odd musical number is inserted, in which a line of dirty children, dressed in rags, file past a stern-looking man, while a variation of the song "Four Pence a Day" is heard in the background.

Instead of sliding on his feet across ice, Bob Cratchit (Rocco Vitalia) slides on his bottom, down a slippery slide used to lower burlap bags full of some product from an upper level to a lower level, on the stage.

When the Ghost of Christmas Yet to Come shows Scrooge his bedroom in the future, after his death, four hags fight over his belongings.

On Christmas Day, Scrooge throws a block party in front of his office, to which Fred, Fred's wife, and Bob come to celebrate.

The grand finale, at Scrooge's office, features an encore appearance by the Ghosts of Christmas Past, Present, and Yet to Come.

Is this adaptation supernatural?
Yes, this film features ghosts and time travel.

Is this adaptation a musical?  Yes.
What songs and/or dances are included?
There is a unique version of "Four Pence a Day," and various other songs, including one which contains the phrase "Marley is dead!"

How attractive and effective is the visual art?
The set, wardrobe, and art are excellent. Although the action obviously takes place on a stage, it makes me feel as if I'm in a fantastic version of London, England, during Queen Victoria's reign.

How creative and intense are the transitions, especially when "the Scrooge" is taken from one time and/or place to another?
The transitions are excellent; they do not use special film effects which detract from the play, although different camera angles and zooming in and out help keep the viewer's interest.
What aerial and/or nap-of-the-earth footage is included?  N/A
What use is made of background extras?
Excellent use is made of background extras, most of whom seem to be healthy, young dancers and acrobats.
What is the most remarkable thing about this adaptation?
The most remarkable thing about this adaptation is, perhaps, the inclusion of the song "Four Pence a Day."
What bonus material is included on the tape or DVD?
Scene selection and subtitles in English, French, German, and Spanish are available on the DVD.  An excellent program, in the form of a twenty-page booklet is included with the disc, in the jewel case.
Posted by William Mortensen Vaughan at Tuesday, February 09, 2021 No comments: