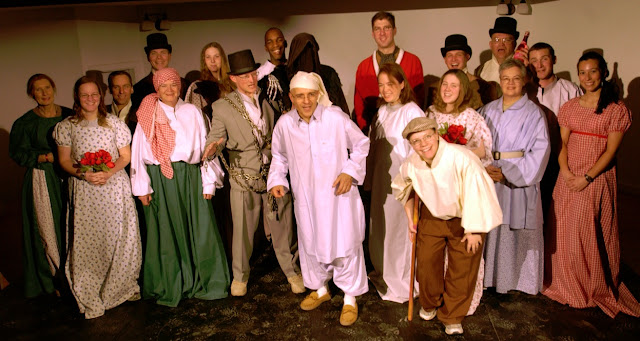 The cast of A Christmas Carol, Bagram Airfield, Afghanistan, December, 2006

Years passed; I grew up, and joined the U.S. Army, which sent me to Afghanistan, to serve at Bagram Airfield, from August, 2006 to February, 2007 (part of Operation Enduring Freedom VII).  During that Christmas season in Afghanistan, U.S. military and Dalsey, Hillblom, and Lynn (DHL) personnel performed a theatrical adaptation of A Christmas Carol, at the Base Chapel.

This performance impressed me so much that, while serving at Victory Base Camp near Baghdad, during Operation Iraqi Freedom VI, in the  winter of 2008 and 2009, I started collecting copies of every adaptation of A  Christmas Carol I could, on Video Home System (VHS) and Digital Video Disc (DVD).

By January, 2017, I owned copies of sixty-six adaptations of A Christmas  Carol.  Now I own, perhaps, a hundred.  The earliest version I currently own is a silent, black and white adaptation from 1901, starring Daniel Smith, in the form of an .mp3 file.  The earliest  adaptation I have on DVD, is from 1910, produced by the (Thomas) Edison Film Manufacturing Corporation - yes, the man who  invented the light bulb.  I have copies of adaptations from every decade since then, including one I purchased from Amazon Prime, in 2020, starring John Brett.

Q:  How many adaptations of A Christmas Carol are there?

Q:  How many adaptations of A Christmas Carol do you own?

A:  As I mentioned above, I own copies of perhaps a hundred adaptations of A Christmas Carol.

Q:  What information do you include in your reviews?

A: I intend to review and rate all of the adaptations that I see or have seen, answering the following questions about each adaptation:

Is this adaptation reverent?

(Give specific examples of reverence or irreverence.)


Does this adaptation mention "God" or "Christ"?

Does this adaptation include the phrase "God bless us...?"


What does my wife think of this adaptation?

Where and when does this adaptation take place?

What language and/or dialects are used?

(e.g., American/British English; if applicable, give specific examples of vulgarity, or language which seems inappropriate)

How closely does this adaptation follow the original novel, by Charles Dickens?

(Give specific examples of departures...)

Is this adaptation a prequel or a sequel?  (If so, explain.)

Is this adaptation supernatural? (If so, give examples; e.g., ghosts, time travel.)

Is this adaptation "framed"?

Is this adaptation a musical?

What songs and/or dances are included?

How attractive and effective is the visual art?

(The set/wardrobe/art is poorly done/adequate/excellent. Give examples; e.g., such-and-such a poster is historically accurate.)

(The transitions are poorly done/adequate/excellent. Give specific examples of gimmicks used to change scenes.)

What aerial and/or nap-of-the-earth footage is included? (If so, give examples.)

What is the most remarkable thing about this adaptation?

What bonus material is included on the tape or DVD?

Q:  Why do some of your reviews have more quizzes than others, and some don't have any?

A:  I intend to include at least one quiz for each adaptation that I review.

In addition to my Ratings, the number of quizzes I create for an adaptation of A Christmas Carol says something about it. An adaptation which fails to hold my interest, or which I consider substandard, may only have one quiz. It's hard to think of ten questions for a silent film that only lasts a few minutes, and about which little information, such as the names of the actors, is available. The more quizzes I create for an adaptation, the more it held my interest, and the more likely it is that I think other people would find it entertaining.

Q:  How hard are your quizzes?

A:  I have experimented with various methods of publishing quizzes, including quizzes on another sites which can become defunct, or require membership; and HTML code which is self-contained on one webpage, and generates a score with the click of a button. I've decided that these methods aren't worth the trouble. Instead, I'm simply going to publish the questions in one post, and the answers approximately one week later. Readers are welcome to grade their own answers on "the honor system."

I consider most of the quizzes I create easy for people who watched the corresponding film and paid attention. My quizzes are numbered in the order in which I create them. Films with larger numbers of quizzes may have harder questions on the most recent quizzes - questions which are more likely to require research to answer, such as, "Which actor in this adaptation starred in another film titled such-and-such?"

Q:  How often do you update this blog?

A:  Unless I am overcome by events, I update this blog every Monday, with at least one new post. Usually, I update it more often than that.

Problems With the Horizontal Navigation Bar

Q:  Why don't the tabs in your navigation bar work?

A:  Sometimes there are glitches with Blogger's "Pages gadget." Please try these links instead:

Q:  How confusing are the amounts of British money mentioned in A Christmas Carol and adaptations of it?

The amounts of British money mentioned in A Christmas Carol (and adaptations of it) are probably confusing to people born outside of Britain and/or more recently than 1965. Characters in A Christmas Carol (and adaptations of it) sometimes mention amounts of money based on Britain's "Pre-Decimal Sterling." The MicroSoft Exel spreadsheet (available for FREE via the hyperlink above) is an ideal tool to help sort these values out, courtesy of A.J.H. Computer Services. For example, Scrooge tells the boy he sends for the prize turkey, that if he returns with it in five minutes, he'll give him "half a Crown." What is the equivalent of "half a Crown," in decimalized Sterling Pounds? Or in comparison to other amounts of British money? To figure this out, go to the "LSD Calculator" tab of the spreadsheet by clicking on it, near the bottom center, and, under "Old Currency," near the upper right corner of the spreadsheet, enter "1" in the cell next to "Half Crown," ensuring that the rest of the cells in that section are clear or have zeros in them. As soon as "1" is entered, either by hitting [Return/Enter] or clicking on a different cell in the spreadsheet, numbers appear in the yellow cells below, indicating that one Half Crown equals "2s. 6 d." (two Shillings and six Pence) in old British currency, or £0.13 (thirteen Pence) in decimalized British Pounds.

The History of the British Pound

The British decimalized their currency on February 15th, 1971. On Valentine's Day, 1971 and prior, the British used a non-decimal currency system, in which a British or Sterling Pound was equivalent to twenty Shillings, and a Shilling was equivalent to twelve Pennies. This system is also known as the L.S.D. system. It does not stand for "lysergic acid"; "L" represents Pounds, "S" represents Shillings; and "D" represents Pennies. "L" stands for the Latin phrase "libra pondo";  libra  means "balance or scale," and "pondo" means "pound," which is a weight equivalent to twelve "unciae," which means "twelfth parts," and is translated into English as "ounces," "uncia" being the singular form, meaning "one twelfth" or "ounce." Ancient Roman ounces weighed approximately 0.722 pounds or 0.329 kilograms.

In Britain's pre-decimal system, monetary amounts were often written as three numbers with slashes between them, like so:   £10/19/11, which represents ten Pounds, nineteen Shillings, and eleven Pence.

I award 5 Stars to each release which meets the following criteria:

I can recommend it, in good faith, to Judeo-Christian audiences of all ages, BECAUSE
I believe most Christians would consider it reverent, AND
I believe most people would find it entertaining, at least once; FURTHERMORE,
I personally enjoyed it so much that I intend to enjoy it again.

I award 4 Stars to each release which meets the following criteria:

I can recommend it, in good faith, to Judeo-Christian audiences of all ages, BECAUSE
I believe most Christians would consider it reverent, AND
I believe most people would find it entertaining, at least once; HOWEVER,
I DID NOT personally enjoy it enough to want to endure it again.

I award 3 Stars to each release which meets the following criteria:

I CAN NOT recommend it, in good faith, to Judeo-Christian audiences of all ages, BECAUSE
I believe some Christians would consider some part or aspect of it irreverent and/or inappropriate; HOWEVER,
I believe most people would find it entertaining, at least once, AND
I personally enjoyed it so much that I intend to enjoy it again.

I award 2 Stars to each release which meets the following criteria:

I CAN NOT recommend it, in good faith, to Judeo-Christian audiences of all ages, BECAUSE
I believe some Christians would consider some part or aspect of it irreverent, and/or inappropriate, OR
I DO NOT believe most people would find it entertaining - NOT EVEN once; FURTHERMORE,
I DID NOT personally enjoy it enough to want to endure it again.

I award 1 Star to each release which I find so offensive that I regret having endured it;
I may not have endured all of it.