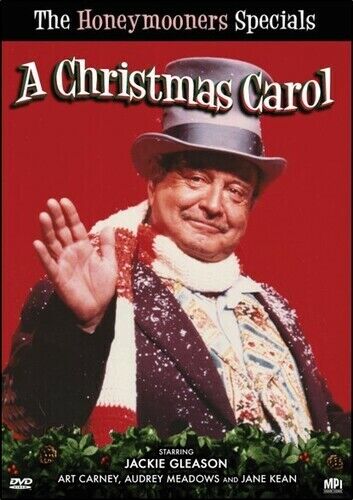 Format Reviewed:  live-action film, on DVD
Runtime:  49 minutes
Availability:
As of November 9, 2021, copies of this film, on DVD, are available, online, for approximately $15 U.S. Dollars.
Is this adaptation reverent?
No, this adaptation is not particularly reverent.

How closely does this adaptation follow the original novel, by Charles Dickens?
This adaptation does not follow the original novel very closely. It's framed as a play put on by two married couples (Ralph and Alice Kramden, and Ed and Trixie Norton), for charity, to feed New York City's stray cats, because Ralph's boss' wife is fond of cats. Ralph directs the play, as a favor for his boss, hoping that his boss will reward him with a promotion.
Ralph and his wife play Bob Cratchit and his wife; Mrs. Norton plays their thirteen-year-old daughter; Mr. Norton plays their ten-year-old son, Tiny Tim, as well as eighty-year-old Ebenezer Scrooge.
A town crier and a half dozen Christmas carolers also make appearances.
There are no ghosts.
Is this adaptation a prequel or a sequel?
No.
Is this adaptation supernatural?
No.

Is this adaptation "framed"?
Yes.  (See above.)

Is this adaptation a musical?
No.
What songs and/or dances are included?
Carolers sing "God Rest Ye, Merry Gentlemen!"

How attractive and effective is the visual art?
The visual art is adequate.
How creative and intense are the transitions, especially when "the Scrooge" is taken from one time and/or place to another?
The transitions are adequate.
What aerial and/or nap-of-the-earth footage is included?
N/A
What use is made of background extras?
The first scene opens in a locker room with four men in it. A half dozen carolers sing "God Rest Ye, Merry Gentlemen!" in the play.
What is the most remarkable thing about this adaptation?
The most remarkable thing about this adaptation is, perhaps, that there are no ghosts in it.