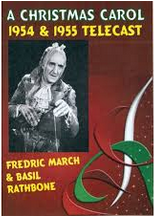 Format Reviewed:  live-action film, on DVD
Runtime:  60 minutes
Availability:
As of February 2, 2021, this film is available on YouTube.  Copies of this film, on DVD, are available online, for approximately $10 U.S. Dollars.
Is this adaptation reverent?  Yes.

The opening scene and credits feature a group of carolers, including two men, two women, a man playing a flute, and a child soloist, singing a song "on this darkest day of winter," about "holly, pine, and mistletoe," along streets with horse-drawn carriages.

Then Scrooge's office is shown, as two gentlemen enter to ask him for a charitable donation.

After Scrooge shows them the door, he tells Bob to clean up before leaving, in about five minutes.

Then Fred (Ray Middleton)  shows up.  Scrooge sends both Fred and Bob away.

Then Scrooge locks up his office and takes his strong box home, where his housekeeper has prepared his supper and his bed.  He cuts her short when she wishes him a merry Christmas as she leaves.

Jacob Marley appears to him, and tells him other spirits will visit him.

The first Spirit, of Christmas Past, looks like Belle to Scrooge, and is played by the same actress:  Sally Fraser.

She shows Scrooge himself, singing a duet with Belle at Mr. Fezziwig's Christmas Ball.  Later, Belle is seen leaving Scrooge, because he has changed so much.

Then Ray Middleton appears in the form of a muscular, young Ghost of Christmas Present, looking more like an elf.  Scrooge mistakes him for Fred.  Fred sings to him, and shows him a vision of the Cratchits, in their home on Christmas Eve.

Then Scrooge finds himself alone with a crow in a cemetery, where he discovers his own tombstone, with his name and the year 1843 inscribed on it; he also finds Tiny Tim's tombstone.

As he wails and cries, and pats Tim's tombstone, he wakes up patting his own headboard on Christmas Morning.

He opens his window and takes in the fresh air and sunlight, and asks a boy what day it is.

The boy informs him that it's Christmas.

Instead of sending the boy to the poulterer's, Scrooge gets cleaned up and dressed, and invites himself to Bob's for Christmas dinner.

On the way, Scrooge happens to cross paths with the gentlemen seeking charitable donations, so he apologizes for the horrible things he told them the day before, and gives them some money, in an amount which astonishes them.

At Bob's, Scrooge promises to raise Bob's salary, and help get Tiny Tim the medical care he needs.

The story ends with Tiny Tim saying, "God bless us, everyone!"

For some odd reason, only five of Bob's children are seen; the middle boy is missing, and, when he introduces them to Scrooge, it appears that Belinda is the eldest daughter, and Martha perhaps the youngest.  The other daughter is named Susie - information not found in the novel.

Fred's party is never shown, and there is never any indication that Scrooge decides to visit Fred.

The entire day after Christmas is precluded by Scrooge's visit to Bob's house on Christmas Day.

Is this adaptation supernatural?
Yes, it includes ghosts and time travel.

Is this adaptation a musical?  No.
What songs and/or dances are included?
Music by Bernard Herrmann... Carolers, Fred, young Scrooge, Belle, Tiny Tim, the Ghost of Christmas Present, and old Scrooge all sing songs I haven't found anywhere else.  The first song, about "holly, pine, and mistletoe," is, in my humble opinion, the best.  I agree with my wife that the others are annoying.

For some odd reason, a harp, instead of a fiddle, is seen at Mr. Fezziwig's Christmas Ball.

How attractive and effective is the visual art?
The visual art is adequate, except that it's in black and white. 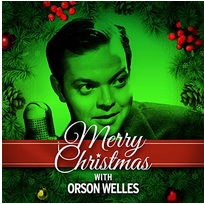 Adaptation:  Featuring the voice of Lionel Barrymore as  Ebenezer Scrooge, and Orson Welles as the Narrator

Is this adaptation supernatural?
Yes, it includes ghosts and time travel.

Is this adaptation a musical?  No.
What songs and/or dances are included?
Music by Bernard Bernstein...

How attractive and effective is the visual art?
My copy of this adaptation is an extra, included on a DVD titled Christmas and A Christmas Carol, a documentary about Christmas in general, with an emphasis on how Charles Dickens' novel, A Christmas Carol, influenced it.
Overall, the DVD seems unprofessional and poorly edited.  There are scenes with no logical explanations as to what the viewer is looking at, or even why the footage is included.

A slideshow is included with the audio recording of Orson Welles' radio adaptation of A Christmas Carol, with historic illustrations from or related to the novel, but they are not placed or timed with any logical correlation to the words heard while the images are on the screen.

How creative and intense are the transitions, especially when "the Scrooge" is taken from one time and/or place to another?
The transitions are poorly done.
What aerial and/or nap-of-the-earth footage is included?  N/A
What use is made of background extras?  N/A
What is the most remarkable thing about this adaptation?
The most remarkable thing about this adaptation is, perhaps, the lack of correlation between the audible words and the illustrations.
What bonus material is included on the tape or DVD?
This slideshow with an audio track is a bonus on a DVD.
Posted by William Mortensen Vaughan at Monday, February 20, 2017 No comments: