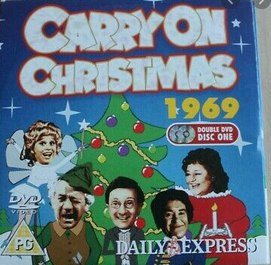 Format Reviewed:  live-action film, on DVD,
Runtime:  50 minutes
Availability:
As of January 20, 2021, copies of this film, on DVD, are available  online, for about $10 U.S. Dollars.
Is this adaptation reverent?
No, this adaptation is not reverent; it's bawdy, and seems to mock Christians.  For example, Scrooge throws the contents of his chamber pot on a nun and her Christmas carolers.  Also, Bob Cratchit prays a humorous, irreverent prayer, and disapproves of the humorous answer he receives.

Where and when does this adaptation take place?
Victorian England
What language and/or dialects are used?
British English

For one, thing, there is no Jacob Marley.  Instead, the Ghost of Christmas Past shows up with several balls and a chain.  He shows Scrooge a vision of Dr. Frank N. Stein, to whom he refused to lend money to finish his monster.  Count Dracula serves as his assistant, instead of Igor, and he takes some of Dr. Jekyll's formula.

The Ghost of Christmas Present is a petite blonde lady, whom Scrooge attempts to seduce.  She shows him a vision of a poet named Robert (Bolling?) who dies trying to elope with his girl friend.

The Ghost of Christmas to Come shows Scrooge another vision - of Cinderella.

Scrooge wakes up and decides to mend his ways, so he takes a chamber pot full of his money outside, and offers it to a woman, who has a Bobby arrest him for soliciting her.

Is this adaptation supernatural? Yes, there are ghosts and time travel.

Is this adaptation a musical?  No.
What songs and/or dances are included?
There are two Christmas carols, each sung by a different group of carolers.  Scrooge blows up the first group of carolers, with a bomb, as they sing "The First Noel," leaving only their shoes with smoke pouring out of them. The second group of carolers is a nun with four schoolgirls (played by elderly men), singing "Good King Wenceslas"; Scrooge empties the contents of his chamber pot on them.

How attractive and effective is the visual art?
The set, wardrobe, architecture, and art are good, including signs in excellent calligraphy.  There are three main sets:  the streets outside Scrooge's office and quarters, Scrooge's office, and his private chamber upstairs.  There are also three sets for the visions:  Dr. Frank N. Stein's laboratory, the bedroom of Robert's girl friend, and Cinderella's kitchen.

How creative and intense are the transitions, especially when "the Scrooge" is taken from one time and/or place to another?
The transitions are fair, involving mostly cameras cutting to the next scenes.  For the bombing scene, an explosion is heard; smoke rises from the bottom edge of the screen until it covers the screen; when the smoke clears, the camera zooms in on the smoking shoes.
What aerial and/or nap-of-the-earth footage is included? N/A
What use is made of background extras?
Little use, if any, is made of background extras, but they don't seem necessary.
What is the most remarkable thing about this adaptation?
The most remarkable thing about this adaptation is, perhaps, the number of feminine costumes worn by elderly men.
Also notable, is the absence of reverence.
This adaptation also has one of the Ghosts of Christmas in chains as if he were Marley, but this is not unique; the Sesame Street and the Sanford and Son adaptations show something very similar.
What extras are included on the tape or DVD?
Three other Carry On Christmas shows are included on the DVD.
Posted by William Mortensen Vaughan at Tuesday, January 26, 2021 No comments: