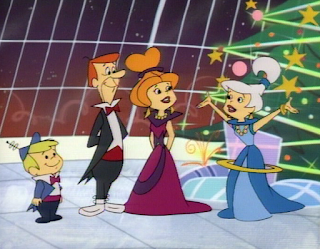 Adaptation:  Featuring the voice of George O'Hanlon as George Jetson

Format Reviewed:  animated film, on VHS
Runtime:  22 minutes
Availability:
As of November 27, 2021, copies of this film, on DVD, are available, online, for approximately $10 U.S. Dollars.
Does this adaptation include the phrase "God bless us...?"
No.
Is this adaptation reverent?
No, this adaptation is not particularly reverent.

How closely does this adaptation follow the original novel, by Charles Dickens?
In this adaptation, "the Scrooge" is Mr. George Jetson's boss, Mr. Cosmo Spacely, the owner of Spacely Space Sprockets, Inc., and George is the "Bob Cratchit." The "Tiny Tim" is the Jeston's dog, Astro, who  opens his Christmas present early, on Christmas Eve; it's a robotic cat, so he chases it until he breaks it, and accidentally swallows one of its Spacely Sprockets. (All toys, in this film, are made with Spacely Sprockets.)
Mr. Spacely has visions of four ghosts:  Mr. Marsley, his former partner, and the usual Ghosts of Christmas Past, Present, and Future, although two of them look more like computers than people, and the Ghost of Christmas Present looks like a large, gift-wrapped box, or "Christmas present."
Spacely remains unimpressed or unintimidated by the Ghosts of Christmas, until the Ghost of Christmas Yet to Come shows him that George will be wealthy and he, Cosmo, will be penniless, after George sues him because of the death of his dog, due to swallowing the sprocket.
Spacely wakes up on Christmas morning, and drags his personal veterinarian out of bed, and takes him to the Jetson residence, where they are unable to get a veterinarian to attend their dog because of the Christmas holiday.
Spacely's veterinarian simply has Astro open wide, then reaches down his throat and pulls the sprocket out, after which Astro recovers completely.
Mr. Spacely leaves Christmas presents for various members of the Jetson family, including a "rocket roll guitar" for Elroy, nuclear roller skates for Judy, Moon Gold perfume for Mrs. Jetson, a Sterling silver apron for their robotic maid, and edible aliens the approximate size of gummy bears, for one of their other pets.
Then he departs as the Jetsons sing "We Wish You a Merry Christmas."
Is this adaptation a prequel or a sequel?
No.

Is this adaptation a musical?
No.
What songs and/or dances are included?
The Jetson theme song is included, as with every episode of "The Jetsons," and, as mentioned above, the Jetsons sing "We Wish You a Merry Christmas," for the grand finale.

How attractive and effective is the visual art?
The art work for this animated film are excellent.
How creative and intense are the transitions, especially when "the Scrooge" is taken from one time and/or place to another?
The transitions are adequate. They include kaleidoscopes and explosions, as well as the usual "cuts."
What aerial and/or nap-of-the-earth footage is included?
Several flight scenes are included, since this story takes place in a future in which people usually fly instead of driving wheeled vehicles over the terrain, but none of the flight scenes are particularly impressive.
What use is made of background extras?
Animated background extras appear where appropriate; for example, at Mr. Jetson's office party.
What is the most remarkable thing about this adaptation?
The most remarkable thing about this adaptation is, perhaps, that it's a futuristic cartoon.